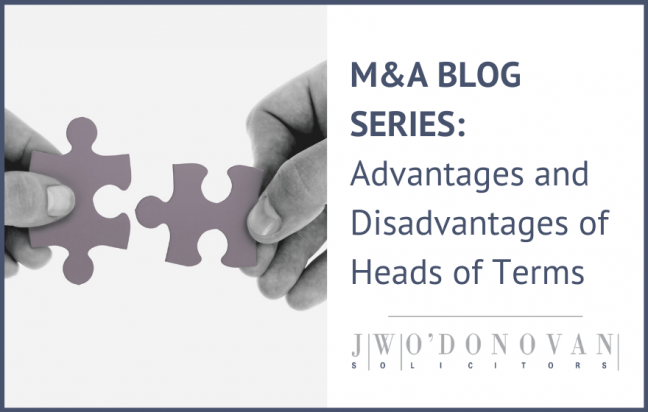 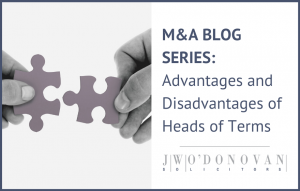 In our last blog in this series, we highlighted the key elements of a Heads of Terms including the provisions covered and whether it is legally binding. In this article, we will review the advantages and disadvantages of using Heads of Terms.

Some of the advantages of using Heads of Terms are:

Getting to the point of an agreed Heads of Terms can be a major milestone on what might or might not have been a long road of negotiation and discussions between the parties, and can be useful to effectively move onto the next phase.

If the Heads of Terms are partially binding, parties can introduce binding commitments at an early stage in the transaction e.g. provisions relating to confidentiality (if there is no separate confidentiality agreement), exclusivity or lock-out undertakings and the treatment of costs.

A Heads of Terms can be useful for setting out parties’ understanding, particularly on complex issues such as pricing models and can help focus the negotiations and highlight major issues at an early stage.

Some of the disadvantages of a Heads of Terms are:

If not properly drafted what one party might have considered to be non-binding may end up being used against them as a binding term.  If the parties do not want the Heads of Terms to be binding, this should be expressly stated.

If Heads of Terms are binding, there should be clear provisions about what happens when they expire. Failure to agree this will leave a contractual vacuum and cause uncertainty over whether there is a contract in place and, if so, on what terms.

Where parties prepare Heads of Terms in an inappropriate manner, and without legal advice, the document prepared has the potential to cause more harm than good.  Any ambiguity can cause uncertainty over the exact nature of the relationship between the parties. There can be doubts over whether or not the parties had intended to be legally bound by the whole document or by particular terms within the document.  Most uncertainties can be eliminated or at least reduced by clear drafting. 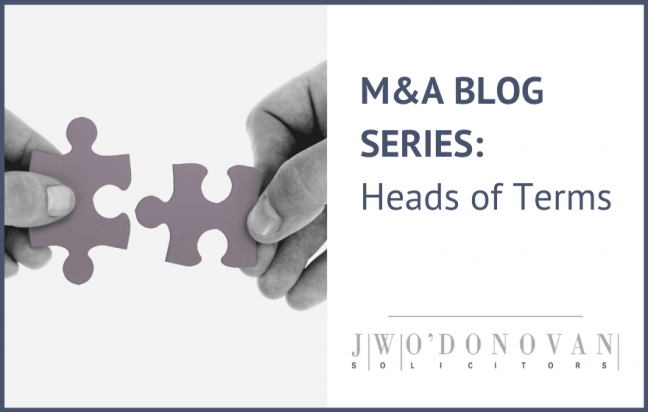 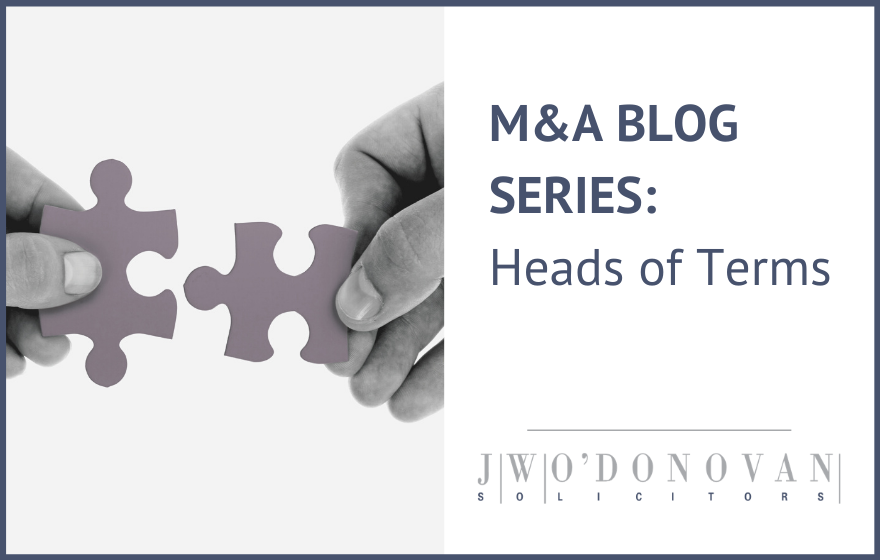 The third in our series on the practical aspects of running a successful mergers and acquisitions transaction, this article looks to highlight the key elements of a Heads of Terms. Please see our news section here for other publications in the series.

When entered into, in the context of a share sale and purchase, a Heads of Terms (which can also be referred to as a Letter of Intent, Memoranda of Understanding or Term Sheet), is entered into relatively early in the transaction for the purpose of the parties recording:

a) The main terms of a preliminary non-binding understanding, intended to lead to a binding contract or series of contracts for an entire project or transaction.

b) An agreement to set out the key terms of a transaction, which contains some binding terms and some non-binding.

c) The terms of a preliminary binding agreement, again intended to deal with certain preliminary matters prior to the signing of a contract to cover the whole project or transaction.

2. Is it legally binding or not?

Above we mention the fact that a Heads of Terms can be non-binding, partly binding or entirely binding with additional terms. The answer to the question therefore invariably depends on what the parties have agreed to at the outset but in the majority of cases we would find that a heads of terms contains only some provisions which are agreed to be binding by both parties. That brings us to the next question.

A standard heads of terms will generally contain provisions including but not limited to:

This will set out the overall agreement between the parties. For example Investaco Limited intends to acquire 50% of SellCo Limited for a price of €10m subject to completion of financial, legal and commercial due diligence.

A deadline for completion of the transaction and execution of a binding Share Sale and Purchase Agreement would generally be included, as well as confirmation of the timelines relating to completion of due diligence.

It might be necessary to set out any pre-conditions to completion such as the approval of the Competition and Consumer Protection Commission, consent of existing customers or secured creditors, or even the conclusion of a commercial agreement by the target company with a new customer without which the deal may not be commercially viable for the purchasing company.

Where a separate Non-Disclosure or Confidentiality Agreement has not been entered into then it is usual for the Heads of Terms to contain a binding confidentiality clause with mutual restrictions on both parties, as in most cases confidential information is likely to be exchanged by both parties.

This is usually a binding provision in the Heads of Terms as the Purchaser will want to ensure that the seller is not at the same time using their bid to attract another buyer at a higher price, potentially wasting the buyers time and resources.  The exclusivity clause would generally be limited to a specified time period so as to ensure the buyer has an incentive to complete their due diligence in as an efficient manner as possible.

Details of the advisors appointed by each party including financial and legal.

A provision setting out that each party will be liable for its own costs, or where the parties agree that one party would be responsible for the costs of a portion of or all of the other parties costs in particular circumstances.

This is a just a flavour of the content of a Heads of Terms which can be as simple or as complex as the parties require. As stated above it is generally the pre-cursor to a more complex and biding agreement to follow with care required to ensure that the parties don’t commit to a binding agreement where this was not intended.

In the next article, we will look at the advantages of using heads of terms.